reprinted from New Zimbabwe by Lucky Tshuma, with corrections and additions Archbishop Karlen, who became the first Metropolitan Archbishop of Bulawayo in 1994, died aged 90 at Mater Dei Hospital on Sunday, October 28.

Known as the “Father of Bulawayo Diocese” for his work building the church in Matabeleland, Karlen was laid to rest at Athlone Cemetery where the Catholic Church has reserved space for its priests and nuns.

Two cabinet ministers – Moses Mzila Ndlovu and Gorden Moyo – joined the mourners who included bishops from other churches.
Archbishop Karlen was born in Torbel, Canton Valais, in Switzerland on February 1, 1922, to Victor and Vicotrina Karlen. 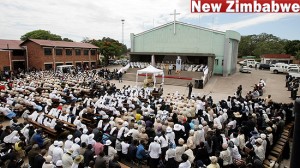 He joined the Marian Hill Missionaries at the age of 20 in 1942. Four years later, he was ordained to priesthood.

In 1951, he was transferred from Europe to Africa, with his first assignment at St. Peter Seminary in KwaZulu Natal, South Africa. He was a parish priest at St Qumbu Mission, Umtata, from 1959 through to 1963 when he was appointed the administrator of the Cathedral in Umtata.

On September 26, 1968, he got his Papal appointment by Paul VI of elevation to the order of Bishop. On December 12 of the same year, he was consecrated the Bishop of Umtata in South Africa by Bishop J. Gruter, the Archbishop of Maseru. 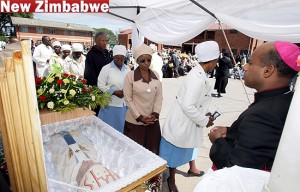 In May 1974, he was informed of his new appointment as the Bishop of Bulawayo. His enthronement was held in August 1974.

In 1994, he was appointed the Metropolitan Archbishop, thus receiving the Pallium as Archbishop from the then Apostolic Nuncio Peter Paul Prabhu Pinto at St Mary’s Cathedral.

He printed the Ndebele Sacramentary, the lectionary, the adult and children’s catechism and promoted the active participation of the laity. He instituted the annual Marian shrine pilgrimages to Empandeni. He also oversaw the establishment of the Emthonjeni Pastoral Centre.

During Zimbabwe’s independence war in the 1970’s and the Gukurahundi massacres in independent Zimbabwe from 1982 to 1987, Karlen was untiring in his courage to reach the people most affected by the violence. When missionaries were systematically murdered between 1976 and 1978, he was the first to follow the security forces to the crime scenes. He was convinced that peace must be established and that he was going to protect the men of God put under his care. 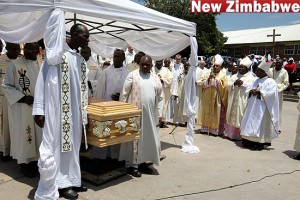 Archbishop Karlen’s coffin being carried to a hearse, as Zimbabwean bishops and Apostolic Nuncio Kocherry pray

In 2007, at a public gathering at the Large City Hall, Bulawayo, he was conferred the “Freedom of the City” in honour of his contribution in Matabeleland.

Archbishop Karlen was the only remaining member of his immediate family of one girl and six boys. He is survived by a niece in Switzerland.